It's October, the finest month of the year. If you follow this site, you're probably here for some writing news, so let's do a little inventory of what I've been cooking up lately.

First, what's the forecast on novels?

The second book in the Jasper O'Malley horror-boiled detective series has been picked up by Grinning Skull Press. (Yippee! Hooray! Yay!) There's no release date yet, but you can bet I'll be here to throw a conniption fit of excitement when I receive all that. The second book in the series is called CESSPOOL, and it has what I consider to be my very best plot twist. You don't need to read the first book in the series, Substratum, to enjoy the second one, but it obviously doesn't hurt.

The digital version of Substratum is available right here for $2.99. Just follow the link for a healthy dose of private eye action, blood thirsty monsters, and a mystery set against the backdrop of Jazz Age Detroit.

When CESSPOOL arrives, we'll have new location, even more mayhem, and some ghosts from Jasper's past.

That's cool and all, but I'm probably best known for my series starting with Carrion Safari and continuing with Carrion Shadows. Is there anything happening on that front? You bet your boots there's stuff happening behind the scenes here. Just how much stuff are we talking here?

How about this? There's two, yes two, new books that have been written and are in the process of being edited. The first is CARRION SCOURGE: PLAGUE OF MONSTERS, and the second is CARRION SEASON: UNNATURAL SELECTION.

I want to have Carrion Scourge in the publisher's inbox by Halloween. I'm pushing it toward something resembling a final draft right now. After the first two books visited a tropical jungle island and the South African veldt, now we're going monster hunting in the Antarctic.

I'll eventually have a nice long post about both books. I won't give you any details about Carrion Season yet beyond the fact that you'll start to see how the overall plot is going to shift toward a longer, more focused series with some recurring elements. The goal is still to ensure that anybody can pick up any of the books and read them in whatever order and enjoy them, but you're going to see a little more overarching plot providing a scaffolding for the series. 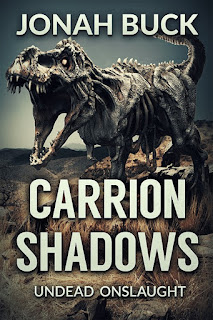 The Carrion Series books are all available on Amazon along with all the other projects I'm involved with.

Cool. That's a lot of hot novel action. Is there anything going on with short stories? As a matter of fact there is. I try to write either a short story or a novel every month. This year, I met my yearly quota in August.

From August through September, I wrote six short stories. Two of them have already found homes, and I think two more of them have a good shot at making it into the anthologies they're aimed at. The other two are a little less likely, but we'll see what happens.

Later this month, I plan to have a little more news regarding the short stories that were already accepted. Until then, have yourselves a spooky October.
Posted by Jonah Buck at 2:52 PM