A little while ago, I submitted a story to an anthology called Toxic. They wanted tales about real world poisons and (surprise!) toxic materials.

I wanted to do something a little different than usual. You know those "cozy mystery" books? The ones that usually feature a busybody amateur sleuth going about some quaint township and solving a dastardly murder at the local cookie shop? Other staples of the genre include helpful animal sidekicks, often a big, fluffy cat, and an extra quaint pun in the title that makes you want to vomit knitting yarn and freshly baked cookies. I'm pretty sure that it's legally mandated that all grandmothers have a few cozy mysteries sitting around.

That's where my story "Miss Blinkers Solves the Case" comes in. It starts out as a super cozy mystery. However, some fun facts about strychnine means this journey on the Orient Express derails somewhere in the deep, dark woods south of Ookyspookyville.

It's available for purchase in physical format here. So far, that's the only place and format it seems to be available in. 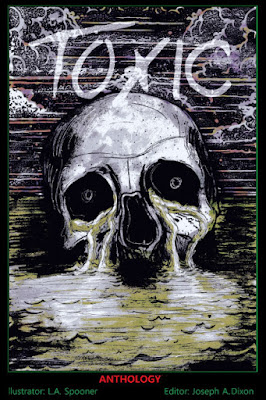 Here's the official blurb for the book straight from Migla Press:


Beware what you eat, beware what you drink, yes, even what you touch. Danger can lurk where you least expect it. All it takes is one mistake and what awaits is an agonizing death. One sting, one bite from the most innocuous creature and before you know it your breathing becomes shallow, your heart erratic. Your mind clouds, everything becomes feint. Death is the result, you lowered your guard. This is the epitome of these covert substances which exist within the world. Whether in nature, or made by man, toxins exude the mystique of danger, of a silent horror which can infect and destroy from the inside out. However the real question is whats to fear more, the substances themselves, or those willing to use them?

Posted by Jonah Buck at 1:56 PM No comments:

Private Eyes, Monsters, & the Egregious Misuse of a Steam Shovel

Hey there boils and ghouls,

Guess what? WRONG. Also, wrong. Wrong and kind of weird. Are you even trying?

My novel, SUBSTRATUM, is now out courtesy of the fine people at Grinning Skull Press. It's currently available on the Kindle and Kobo, with hard copies and other formats coming out soon.

This is a special book to me. It's the first novel  ever wrote, after cutting my teeth on short stories for a few years. I wrote it in 2013, during my second year of law school, finishing it on December 7th. Three years and a week later, here it is. Getting it to print was a considerably journey.

Here's the official back of the book blurb:

Deep beneath the streets of Detroit, someone — or something — is picking off the miners of the Detroit Salt Combine. The company appears to be more concerned with the protection of their equipment than with the safety of their employees, so the miners take it upon themselves to approach the Attican Detective Agency to find out what's happening to their co-workers. Jasper O'Malley, an agent with a reputation for getting things done (at great cost), is assigned to the case.

Teamed with Sadie Dupree, a geological expert, and Amelia Rio, an ace driver for one of the Organized Crime families, Jasper ventures underground to investigate the fate of the miners. But there's another factor operating within the labyrinth of tunnels, a factor that would kill to keep its illegal operations undiscovered. And still another factor has infiltrated the hired detective's own group. Yes, there's a Judas working with Jasper, a traitor who knows the secret of the mine, and who will stop at nothing to keep the mine's secret. Can Jasper track down whom or what is responsible for the miners' disappearances, or will he and his one true ally suffer the same fate as the unfortunate workers?

Fun fact: A lot of the story takes place in the Detroit salt mines. These are, in fact, a real place. Before the city of Detroit became a massive manufacturing hub in the early 20th century, one of its main industries was salt mining. Massive shafts dropped 1,200 feet below the city's surface. I took some liberties with their layout, but the mines are a fun little piece of lost history and a great setting for monsters to stalk our protagonists. Until recently, you could even take tours of the mines. Check them out. 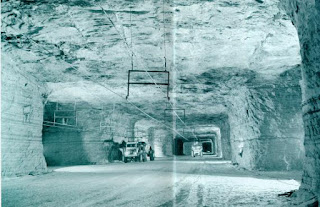 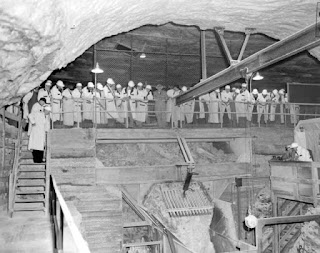 Posted by Jonah Buck at 6:05 PM No comments: