Despite the boundaries of "good ideas" or concepts like "tastefulness," I have written the first draft of my sixth novel. The working title is LIVE NUDE SEANCES.

Now, you're probably saying to yourself, "That's an odd title. Stop trying to sell me books, you strange man." But wait, there's more. The genesis for this novel actually came from a short story I wrote a couple of years ago for an anthology of steampunk ghost stories. (Link below).

The world of LIVE NUDE SEANCES takes place in an alternate version of 1920s America. Abraham Lincoln has recently been elected for the 17th time, aided by mechanical implants. On nights with a full moon, you can still see the burned out remains of the old international lunar base. And the most important field of science is ethereal engineering, which allows scientists to bind spirits to mechanical contraptions as a source of power. Cheap, plentiful energy, courtesy of the spirit realm and the unrelenting scientific probing into the supernatural, has reshaped the world on a fundamental level.

However, one side effect of this progress has been a certain erosion in the fabric of reality. The bizarre is increasingly common. Roughly one percent of all children are now born as monsters. They're perfectly healthy and intelligent, but marked by horrific deformities. Segregated into monster districts away from the rest of the population, they make their living on the fringes of society.

When an extremely powerful piece of ethereal technology goes missing, the Department of Ethereal Sciences must rely on three of these monsters to get the item back. Thurgood, Persephone, & Nicolette, a trio of local bootleggers, must now retrieve to project. From a Pacific resort city to an abandoned ghost town to the slaughterhouses of Chicago, they'll have to face down a cult obsessed with success, traitors within the Department of Ethereal sciences, and a violent anti-monster gang. And those are only the human challengers they'll face if they don't want the project to blow up in their faces.

Anyhow, I'll start shopping it around once it's been edited. Hopefully, it'll be coming to bookshelves near you at some point in the future.

For those of you curious about the original steampunk ghost story project that spawned this, you can get a little peek at some of the novel's world HERE. 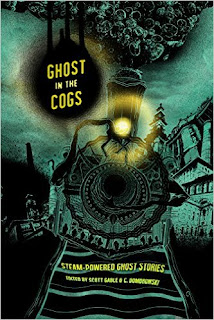